I would have lived without the knowledge of this genius writer, had he not been introduced by Prakash Publishers.

One of the biggest contribution of Prakash Publishers to the Tamil comics industry is the introduction of European comics. Till mid-80s, the comics printed in Tamil were mainly from the English originals. However, once Lion family entered Eurpean market to bring the non-English speaking heroes, we had choice like never before. Characters like Iznogoud(Mathi Illa Manthiri), Bruno Brazil, Bob Morane(Roger & Bill), Paul Foran(CID Marshall), Ric Hocket(Reporter Johnny), XIII have become household names among Tamil comics fans. They have also become familiar with the names of their creators, Goscinny, Greg, Van Hamme, William Vance etc.

First in the series of European characters is Lucky Luke created by Goscinny, who also created Asterix, Ompa-pa, Iznogoud (Mathi Illa Manthiri in Tamil). Illustrations were done by Morris for this issue.

He entered the Tamil comics scene like a super star. First issue itself is a special issue, that too in color and for just Rs 2/-. Wow!!! What a grand entry!!! He never looked back since then. Even today he remains the No:1 cartoon character among Tamil comics fans. He is as popular as the other cow-boys, Tex Willer and Captain Tiger(Blueberry).

The editor has selected a very lively comedy story as the first story of this super star. Titled "Super Circus", this was released under the Junior Lion banner on 01 Jan 1987. Take a look at the cover and the editor's forward for this issue below: 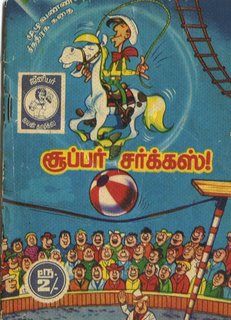 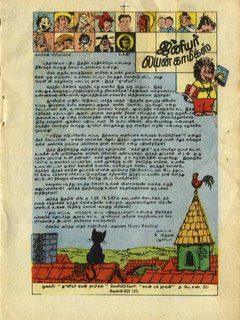 Note, the editor wrongly mentions, that the artist name is Goscinny Morris, in fact they are two different persons. Goscinny is the writer and Morris is the artist.

The story starts with an introduction about Lucky Luke and his horse & campanion Jolly Jumper. He can shoot faster than his own shadow. Hmmm!!!That is too fast, even for a comic book hero. 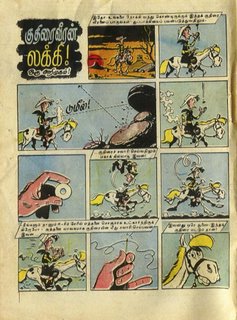 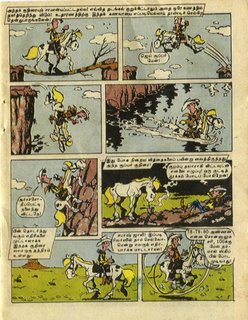 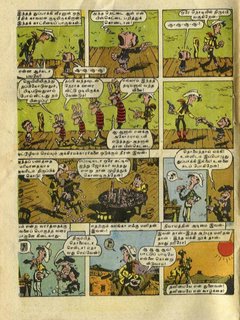 A very simple and comical story line. Lucky Luke comes across a circus which was moving to the next town through Indian infested territory. Looking at the condition of the owner Lucky Luke decides to accompany them to the next town, where they would be safe. However problem was awaiting them, as soon as they enter the next town. Mr Regan, who owns almost everything in the town does not like the circus to become the attraction during his rodeo competition. He tries his level best, not to let them perform in the town. The story revolves around how Lukcy Luke manages to thwart all his attempts against the circus and how Mr Regan finally becomes a part of the circus. Ever drinking gambler owner Morris, his wife and Trapeze artist Vanessa, his son-in-law and jestor, and horse riding daughter all play their part in making this a lively story. Even the elephant Jumbo and Lion play a major role in the story.Each time Luke punches Mr Regan, his diamond tooth falls down somewhere. In one scene he asks Lucky Luke to wait to remove his diamond tooth, before hitting him.


The first and last page of the story is below: 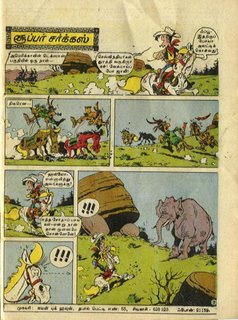 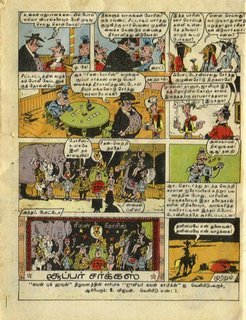 Also take a look at the ad for the forthcoming issues. 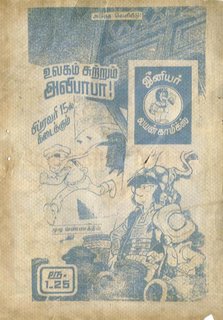 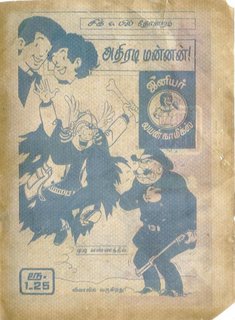 See what the editor has to say about this issue, in his article about Tamil comics in the magazine "World's Comic" issue 2, published in Spring 2002.

In Jan 1987 – JUNIOR LION COMICS, a new comic exclusively for cartoons and MINI-LION a pint sized mag for short action tales were introduced.

The first issue of JUNIOR LION COMICS had the international favorite LUCKY LUKE in full color at a price of Rupees Two!!. One daresay this will stand as an unsurpassed feat because virtually nobody can ever again do a multicolor issue at this price. This was the first taste of a full length cartoon story for Tamil readers and the response was overwhelming. This was a period in which Tamil readers had a choice like never before to savor the very best of world comics.

This story was released under the title "Western Circus" in the Orignal French and in English. Take a look at the English cover. This issue is one of the few English Lucky Luke titles you can get in the market now. 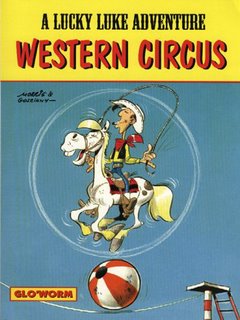 The write up for this issue at the Amazon site is given below:

In this tale, he joins a circus at risk of going out of business, and takes on the bigwig who "owns" a town and doesn't want an alternative entertainment to his annual rodeo. You get bandits, hitmen, "injuns", elephants, lions, drunks, all leading up to the final climax at the rodeo.

Recently I watched the cartoon VCD of this issue. Needless to say, I have enjoyed the whole episode. 26 minutes of non-stop fun. Even my three year daughter can identify Lucky Luke now, thanks to this VCD.

Those who watch Star One in India, don't miss out this episode of Lucky Luke for anything.

Thats all for now guys. Do let me know, what you feel about this post.

I'm back after a long break!!!

As suggested by Saleem, I'll take one issue at a time and write about it, the story, background information, release date and any other related info. Also my opinion, when I have read it, what I feel about it etc. Hope this is OK with you guys. Drop a line as to what you feel about this new approach.

First in this series is the 72nd issue of Muthu. Title is Aaviyin Geetham. See the cover scan below. 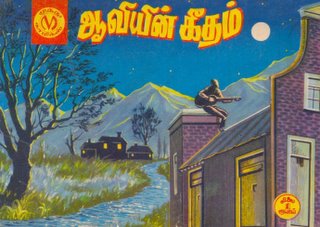 This issue was released in April 1978, which can be seen in the page 3 scan of this issue. 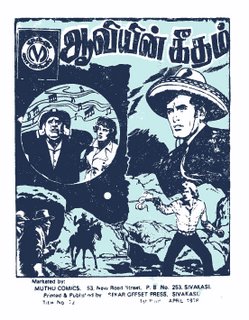 I have read this issue sometime in early 80s, when I was in Mettur. This must be the fourth or fifth Muthu issue I have read in my life. This is the first ever Cisco Kid I have read, and my first double color issue as well. The name Cisco impressed me very much, Panjo as well. I thought I'll change my name to Cisco, when I have read this book. :-) Couldn't tolerate when I saw the name of the character changed to Disco in Rani comics. Funny guys!!!

The story goes like this. Some one is trying to murder Randy, a popular singer in a small American town. Cisco, friend of Randy, thwarts the first attempt just in time. Even Randy does not know who the enemy is, as he is such a simpleton. One more indirect attempt was made to kill Randy, by spreading the rumour that Randy carries all his money in the Guitar he carries. And this time Cisco manages to trace the culprit. The originator of the rumour turns out to be Mr Alex, a local banker, who wants to marry Randy's wealthy sweetheart Lisa. Alex is more interested in wealth, which he can inherit by marrying Lisa, that any love for Lisa.As Alex knows that Lisa will never agree to marry him, as long as Randy is alive, he tries to remove Randy from the equation. However Cisco manages to terrorise Alex with Randy's music and songs, who Alex believes was killed for the money in the guitar. He was caught when he tries to escape the supposedly dead Randy, after looting his own bank(of course the money belongs to the public).

The scene I have enjoyed very much is in 29, where Alex runs scared to death, thinking that Randy's ghost is after him. 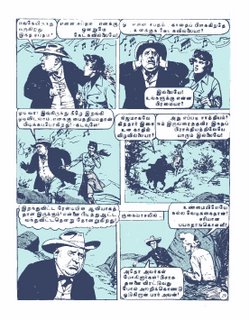 Very interesting story line. For a long time I was under the impression that this was the only Cisco story in Muthu, as Cisco stories were no longer published in 80s, the time when I have started reading comics seriously. Old issues were rare to come by, even in those times in the town of Mettur, because this was the only entertainment for the kids, when TV transmission was unheard of. You have to go to "Pattanam" (Chennai) to see the idiot box, in those days. Cricket coverage was only through, Akashvani, which will alternate between English and Indhi(as pronounced), except for the test matches in Madras. The copies I have bought from the news stand were mostly the repints of early Muthu issues featuring Mayavi, Johnny Nero, Lawrence & David (issue numbers 140+). I felt very happy when I got some issues of Muthu Comics and Malai Mathi Comics featuring Cisco Kid recently. Luis Jose Salinas, who drew Cisco Kid from 1952 to 1968, remains my favorite strip artist. So I never pass an oppurtuniy to acquire Salinas art work. Few years back I have bought some Dell Cisco Kid issues from Milehigh comics at exhorbitant prices, thinking that they were drawn by Salinas. However I was disappointed, as they turned out to be pre-Salinas issues, with very average artwork.

Take a look at the other non-story pages from this issue. 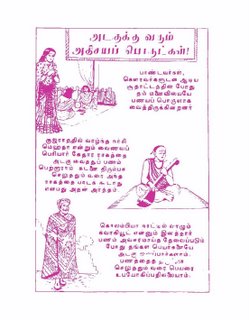 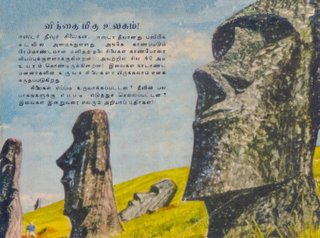 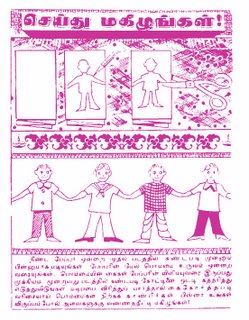 This story was reprinted in Rani comics under the title "Pei Manithan" in issue number 125 dated Sep 1-15, 1989. Translation stadard is nowhere near Muthu, apart from Cisco being called Disco. Grrrrrrrr!. Take a look at the cover page and first page of this Rani comics reprint. Compare the translation of Rani with its corresponding Muthu page. I would love to see the original of this issue in English to check, why the translation varies so different between Muthu and Rani. 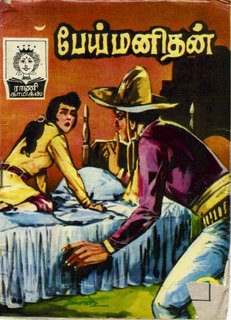 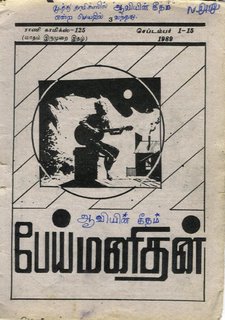 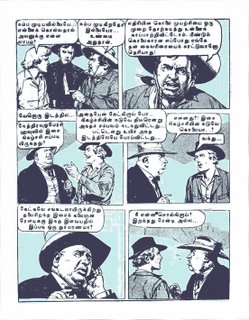 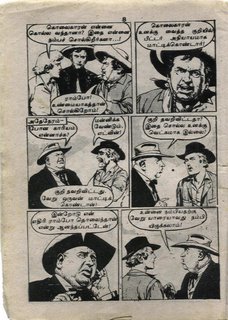 A very big thanks to Dr Sathish(Kovai) for his valuable scans. All the Muthu scans in this post are provided by him.

Hope you have enjoyed this posting. Drop me a line, if you like this approach and for any feedback.